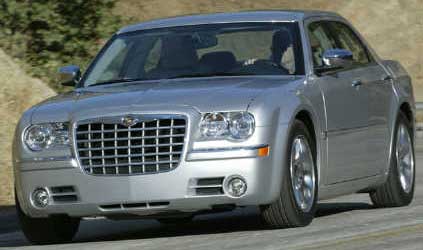 Okay, so this is the flip side of my previous review of the 2007 Camry Hybrid. I did the reverse trip (Toronto to Montreal) with this car, including some driving around Toronto area and a very little bit of surface streets in Montreal. Overall, about 650kms with this car in a VERY short period of time, from dusk to dark.

First off, the rental car version of this is a 6 cylinder. That isn’t as much of a penalty as you might thing, but it is clear that these things ain’t got a hemi. Enough power to play in traffic? Yup. Enough to haul your ass down the highway far into the range of a pricey ticket? Yup. Squeal the tires and leave some patches? Not going to happen.

The reality is that by having only the 6, this version of the 300 is a little more a cruiser, a little lighter, and much better balanced. The true large family car nature comes out loud and clear. My passenger seemed to think so, she got into the car and immediately got comfortable and fell asleep for 4 plus hours. Take that as a good sign of a soft ride, decent seats, and a quiet environment.

After driving the Camry and it’s video game version of car dynamics, the 300 was a pleasant, direct, and altogether more normal deal. I didn’t really notice that much about the car going down the highway, which is a great thing. That means nothing was particularly wrong. Many nice features, like the “flick the flasher, it clicks 3 times” deal is nice for those quickie lane changes, the seats adjusted easily to fit my tired back, and the controls are all pretty much where they should be (but not quite the old Chrysler standards, which threw me a curve for the first 30 seconds or so). The smallish windshield and high sides make for a somewhat more restrictive view on all sides, but the large sunroof was a nice touch (although I never opened it, it was too cold).

In the end, as a rental car, this has to be one of the better ones I have driven. This car does exactly what it sets out to do: Smooth ride, tons of space, huge trunk, and a dash of unque style… and with the 6, gas mileage was acceptable and normal for the trip done so many times before. If i was going to buy this as a personal car, I would likely look at one of the V8 options, just to see what the implications are. After all, you can never be too thin or have too much horsepower 🙂